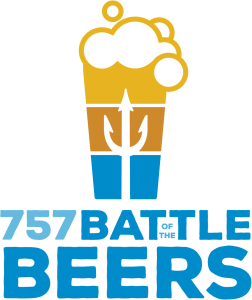 THE BATTLE IS OVER…

Congratulations to the 2016 Champs!

Thank you Hampton Roads for making the 2016 757 Battle of the Beers BIGGER and BETTER than ever!! This year ALL open-for-business 757 breweries (as of August 2016) – that’s 18 breweries, folks –  competed on behalf of their chosen charity in 3 unique categories including:
-Best IPA
-Brewer’s Choice
-People’s Choice

Beach Ambassadors would like to congratulate the brewers who placed in the 2016 Battle of the Beers!